Explore the Best of Marrakech and Beyond: Discover the Exciting Marrakech Tours

Marrakech Tours by Excellence Morocco are about discovering this amazing vibrant city of Marrakech. Marrakech also spelt Marrakesh, is a chief city of central Morocco. The first of Morocco’s four imperial cities, it lies in the centre of the fertile, irrigated Haouz Plain, south of the Tennsift River. The ancient section of the city, known as the medina, was designated a UNESCO World Heritage site in 1985. 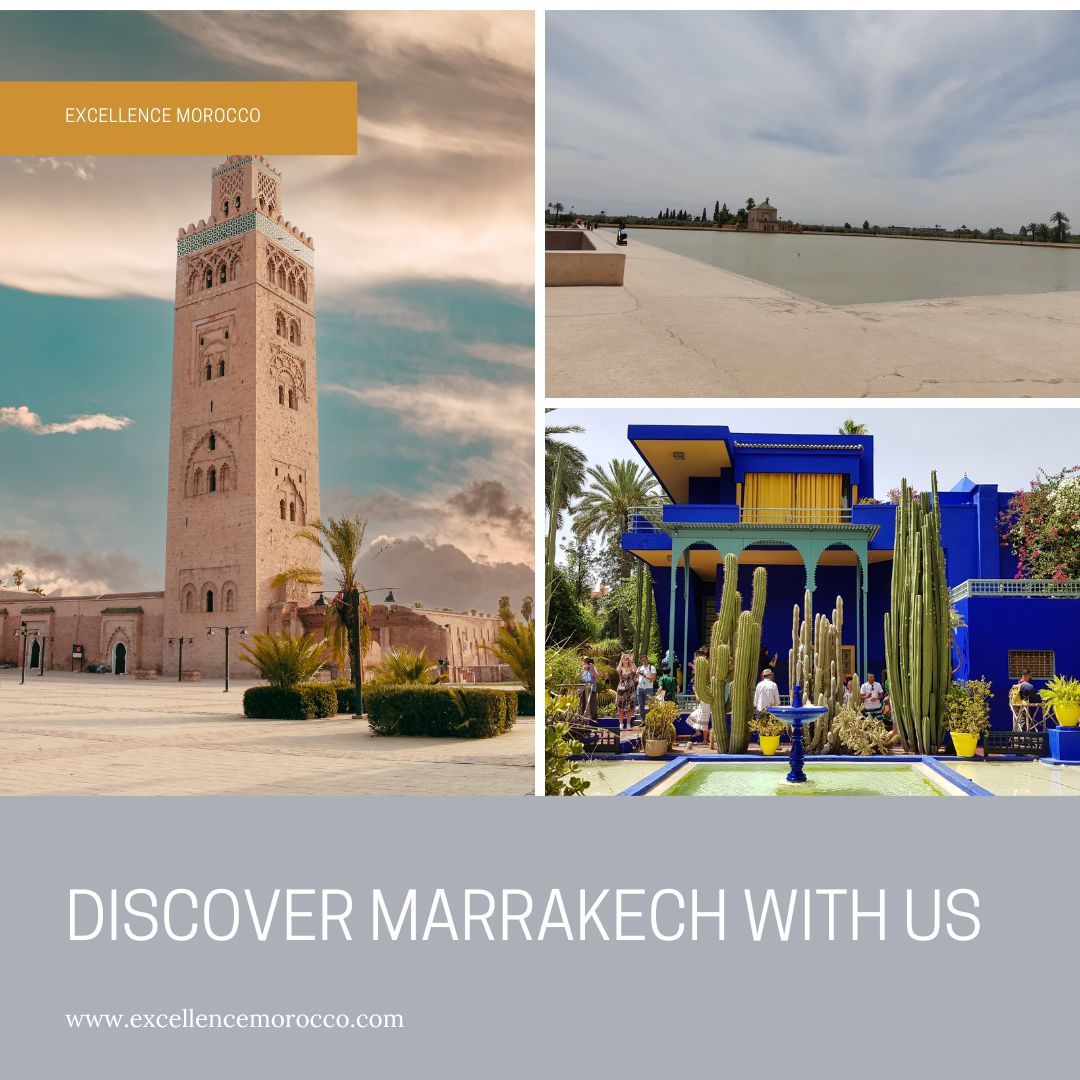 Marrakech gave its name to the kingdom of which it was long the capital. It was founded in the mid-11th century by Yūsuf ibn Tāshufīn of the dynasty of the Almoravids, and it served as the Almoravid capital until it fell to the Almohads in 1147. In 1269 Marrakech passed to the control of the Marīnids, whose preferred capital was the northern city of Fès. Although Marrakech flourished while serving as the capital under the Saʿdīs in the 16th century, the succeeding ʿAlawite rulers resided more often at Fès or Meknès; however, the ʿAlawites continued to use Marrakech as a military post. In 1912 Marrakech was captured by the religious leader Aḥmad al-Ḥībah, who was defeated and driven out by French forces commanded by Col. Charles M.E. Mangin. Under the French protectorate (1912–56), Marrakech was for many years administered by the Glaoui family, the last of whom, Thami al-Glaoui, was the chief instigator of the deposition of Muḥammad V in 1953.
Marrakech is the second largest city of Morocco. It has about 800,000 inhabitants and most of the houses are colored read. Marrakech MedinaIt is truly a colorful city of entertainment and is called the one of the pearls of morocco. It is the major economic centre and has several upcoming industries and markets.
It lies at the foot of the Atlas Mountains and this gives it a very beautiful location. Like many north African cities, it is mainly divided into medina which is the old fortified city and a modern city nearby (called Gueliz). The city has a wonder climate with shimmering white snowy winters and warm humid summers. It is the warmth and the sociability of the inhabitants that is world-renowned.
Surrounded by a vast palm grove, the medina in Marrakech is called the “red city” because of its buildings and ramparts of beaten clay, which were built during the residence of the Almohads. One part of the Marrakech tours are seeing the heart of the medina Jamaa el-Fna square, a vibrant marketplace. Nearby is the 12th-century Kutubiyyah (Koutoubia) Mosque with its 253-foot (77-metre) minaret, built by Spanish captives. The 16th-century Saʿdī Mausoleum, the 18th-century Dar el-Beïda Palace (now a hospital), and the 19th-century Bahia royal residence reflect the city’s historical growth. Much of the medina is still surrounded by 12th-century walls; among the surviving gates to the medina, the stone Bab Agnaou is particularly notable. The modern quarter, called Gueliz, to the west of the medina developed under the French protectorate.
Marrakech is famous for its parks, especially the Menara olive grove and the walled 1,000-acre (405-hectare) Agdal gardens. An irrigation system built under the Almoravids is still used to water the city’s gardens. Popular for tourism and winter sports, the city is a commercial centre for the High Atlas mountains and Saharan trade and has an international airport. It is connected by railway and road to Safī and Casablanca.
Marrakech History
The name probably has been derived from Berber words ‘ mur(n) akush ‘ which means the land of god. Till a few decades ago, the Arabs, Persians, and Europeans, called Morocco the Kingdom of Marrakech. It was founded in the 11th century and was the capital of an empire that stretched from Spain to Senegal.
In earlier times it was a major location on the crossroads of caravans going in the direction of Timbuktu for trade. Though initially just used as a resting place it was later was taken over by the leader of Almoravids, Abou Bekr as a strategic location for troops. His cousin Youssuf Ibn Taschfin built the first mosque and a house.
The 12-century saw it being further developed by the Almohads. Even now you can find the 9km red earth wall built during the Almoravid rule. It became came under the Saadian Empire of Ahmed El Arj in the 16th century. They build many impressive buildings and tombs which have been well preserved.
Later on, it was conquered by the Sultan of Alaouits- Moulay Ismail. 1917 saw it being governed by Pasha El Glaoui under French rule. In 1956 it was taken over by King Mohammed V but after his death, the fortunes were confiscated.
After, the capital was shifted to Rabat and Marrakech became a provincial capital. It is now the capital of Marrakech Tensift el Haouz region with an area of 31,160 km.

Marrakech, also known as the “Red City,” is a vibrant and bustling destination in Morocco that is famous for its colorful markets, stunning architecture, and rich culture. While the city itself is a must-see destination, there are also many exciting tours that take visitors outside of Marrakech to explore the surrounding areas.

Experience the Magic of the Atlas Mountains, and Berber Villages in Marrakech Tours

One popular tour is to the Atlas Mountains, which offer a stark contrast to the bustling city. The mountains are home to Berber villages, where visitors can learn about traditional mountain life and see the beautiful terraced farmland. Another popular option is a hot air balloon tour over the Atlas Mountains, providing a bird’s eye view of the stunning landscape.

Discover the Sahara Desert on a Camel Trek

Another tour option that is quite popular is the desert excursion. Take a camel trek into the Sahara Desert, and spend a night in a traditional Berber camp under the stars. In this tour, you will also have the chance to see the sunset over the dunes, and also see the beautiful Erg Chebbi Dunes.

Also, many visitors to Marrakech also take day trips to nearby towns and cities such as Essaouira and Ouarzazate. Essaouira, a coastal town known for its windy streets and traditional architecture, and Ouarzazate, a desert town that is known for its film studios, and the location of many famous movies were filmed.

We offer day trips, multi-day trips and also private tours, that can be tailored to your interests and preferences. So, you will have a lot of options to choose from, and it is highly recommended to take at least one of these tours, to have a complete experience of Marrakech and its surroundings.

Book now your Marrakech Tours! Enjoy your time with us!