The Top 7 Things to do in Casablanca The Top 7 Things to do in Casablanca, Morocco

The top 7 things to do in Casablanca are all about discovering this amazing city, Casablanca to its core and having an amazing time. You have the ocean, architecture, shopping, food, and walks. All in one day.

Since the Middle Ages, Casablanca was a prosperous city known as Anfa. In 1907, Casablanca was occupied by France. Under French administration has developed rapidly, and the modern city was built around Moorish name suburbs.

Casablanca is the main gateway to Morocco, and many visitors’ first taste of the country, as it is home to the primary international airport. This bustling city is Morocco’s business powerhouse and industrial centre, with a modern swagger that is unseen in other parts of the country.

Needless to say, compared to the history and heritage of Marrakesh and Fez, it can’t compete, and most visitors only pass through or stay one night. Despite the fact that Casablanca’s tourist attractions and things to do may be few, you will find some gems if you delve a little deeper.

Casablanca has a lot more to offer than first meets the eye: beautiful coastline, one of the most magnificent mosques in all of Morocco, and mouthwatering restaurant options, medina…

Casablanca city walls give you a strange feeling – we are small and dignified. A drastic change compared to other Moroccan cities, where city walls dominate the city’s image. Characteristic aspects of Casablanca are wide boulevards and tall buildings. Streets as the sun start from the Place de Nations Unites. This place is the centre and also where the modern town meets the Medina.

Though not as atmospheric as other Moroccan cities, Casablanca is the best representation of the modern nation. This is where money is being made, where young Moroccans come to seek their fortunes and where business and the creative industries prosper.

The city’s handsome Moorish buildings, which meld French-colonial design and traditional Moroccan style, are best admired in the downtown area. Visitors who spend time there, in the Quartier Habous and in the beachside suburb of Ain Diab, are sure to get into the local swing of things and realize that this old pirate lair is looking towards the future, embracing the European-flavored urban sophistication that has underpinned life here for the past century.

The number of construction projects currently underway here is simply extraordinary – major redevelopments include those at Place Mohammed V and the Parc de la Ligue Arabe, and new public buildings include the Grand Théâtre de Casablanca.

If you expect the classic film in its name to the image of the city, be prepared to have a shock – the modern city of Casablanca is removed from Oriental romanticism more than any other place in Morocco. Casablanca impresses with modern, wide boulevards and buildings well maintained animated, high, and white. Few things here conform to a traditional oriental image.

If something in this town that looks like the movie Casablanca when it comes to the old town. It is small, beleaguered by small houses and few places of real beauty and home to several thousand. On these narrow streets, you can buy everything from spices to the animal pound. In one corner, the smell of pastries will make saliva, and in another place, you can buy several varieties of olives.

Some things to know before your Travel to Casablanca

The top 7 things to do in Casablanca in our view: 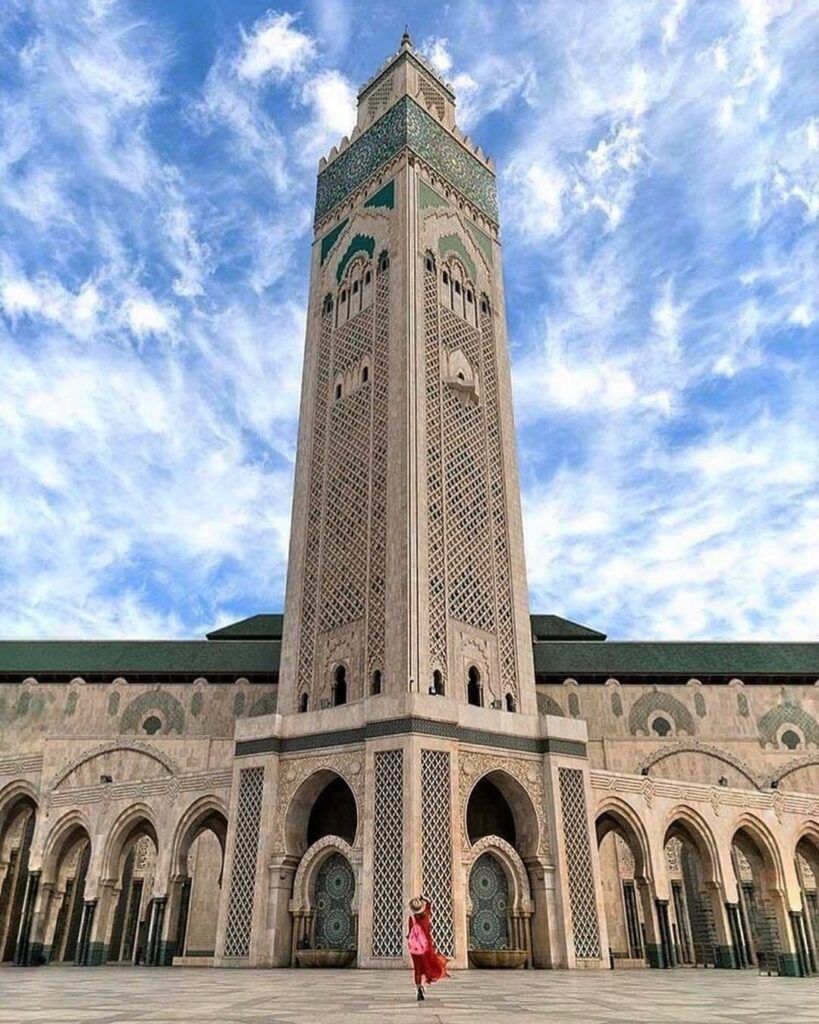 On the shoreline, just beyond the northern tip of Casablanca’s medina (old city), the Hassan II mosque dominates the entire city. Finished in 1993, it is the second largest mosque in the world, covering two hectares in size with the world’s tallest minaret (200 meters high).

This massive, ostentatious mosque commemorates the former king’s 60th birthday. It took 6 years to build and construction ended in 1993 at an incredible expense (estimated to be about €585,000,000). It is one of the largest mosques in the world.

With a 688-foot-tall minaret, the tallest in the world, it is impossible to miss this architectural wonder from miles away. The mosque sits on a prime, oceanfront property. The courtyard is constantly teeming with people who are there to worship or just marvel at its beauty.

The prayer hall can accommodate 25,000 worshippers, while the courtyard (which boasts a retractable roof) can fit another 80,000.

Astonishingly intricate decoration covers every centimetre of surface. The location, right on the tip of the rocky bay above the ocean, is thoroughly dramatic.

Non-Muslims can visit the mosque on free guided tours, which are run by the mosque. The tours begin at the mosque’s western entrance several times a day.

The courtyard is open to all to visit and it is a wonderful place to spend an afternoon. The turquoise marble tiles arranged in classic Islamic patterns shine vibrantly in the sunlight. The Hassan II Mosque is definitely one of the most photogenic location in Morocco! It’s most certainly the number one thing to do in Casablanca.

Place Mohamed V is the central plaza of Casablanca and is home to many of the city’s important official buildings, including the main post office, Palace of Justice, Prefecture, French consulate, and the main Bank of Morocco.

The building facades all sport the neo-Moorish style (known as Mauresque) that French Resident-General Lyautey planned out for the city as he set about modernizing Casablanca in the early 20th century.

The downtown district of Casablanca between Place Mohamed V and Boulevard Mohamed V is brimming with this style of architecture, which blends Art Deco and Art Nouveau with traditional Moroccan design.

In particular, take a stroll down Rue Tahar Sabti and Boulevard Mohamed V to admire some of the best-preserved building facades.

3. Enjoy Some Ocean Air along the Corniche

The Corniche is an oceanfront neighborhood just south of Casablanca. It is filled with nightclubs and cafes with views of the ocean. Enjoy a peaceful afternoon stroll along the boardwalk that runs alongside the beach. Soak in the sun and the views. You’ll see local kids playing soccer on the beach and likely be offered a horse ride (for a cost of course).

4. Shop in the Old and New Medina

It’s nearly impossible to walk through one of the many souks all over the country without stopping for a look. Brightly coloured blankets and scarves, leather bags of every shape and size, hand-painted pottery, intricate metal lamps, and intoxicating spices will have you wishing you had brought another suitcase with you!

Shops in the Old Medina of Casablanca sell anything and everything for locals and tourists alike. You’ll find knock off designer goods intermixed with futbol jerseys and perfumes. It’s not your typical souk and you’ll probably only see a handful of other tourists.

The New Medina, or Habous Quarter, is a maze of charming alleyways and handicraft shops. You can load up on leather goods, plush rugs and Moroccan clothing. Tourists will find less hassle here than in many of the souks in Morocco. As such, you will have an enjoyable time browsing the wares.

Casablanca has some truly amazing food options around the city.

Order fresh salad or soup as an appetizer, great bread and Barkouk tajine (beef tajine) as the main course at La Sqala finishing with a mint tea. This pretty garden restaurant is the perfect peaceful stop while wandering around the Old Medina.

Head to the Central Market for lunch for fast and fresh seafood while enjoying the sunshine. You can enjoy people-watching at the outdoor tables.

A large fountain sits at the centre of this bustling square. Locals gather to watch as the water flows and birds fly overhead. Vendors selling chewy coconut macaroons provide tasty treats for children as they ride on a borrowed toy jeep through the crowd. It’s the perfect place to have a seat and watch the locals doing what they do best in Casablanca – having some good old-fashioned fun with their families!

There are several wonderful museums in the city of Casablanca that are worth checking out during your trip. These three were our favorites:

The origins of Casablanca can be traced to the medieval town of Anfa, which is now one of the city’s suburbs.

Anfa became the capital of a Berber principality in the aftermath of the Arab invasions of the 7th and 8th centuries. The Berbers embraced Islam but quickly succumbed to heretical doctrines, setting up their own prophet and a Qur’an in the Berber language.

The principality was known as Berghouata, and its tribal inhabitants joined a Kharijite rebellion against the Arab governor of Tangier. In the 11th century, the Almoravids waged holy war against these heretics, who were finally defeated by the Almohad Sultan Abdul Mou’min.

The town came under the influence of the Merenids during the 13th century but eventually became independent as the dynasty weakened.

In 1575, the town was rebuilt, fortified, and renamed Casa Branca by the Portuguese in an attempt to establish control over the area. However, the Portuguese rulers fell under constant attack by surrounding Muslim tribes and were finally forced to abandon the town following a terrible earthquake in 1755.

Under the reign of Sidi Mohamed ben Abdallah (1757-1790), the town was rebuilt with a mosque, madrasa, hammam, and a fort and renamed Dar El Beida (The White House), which the Spanish eventually translated as Casablanca.

We hope you have enjoyed our list of things to do in Casablanca, Morocco! Excellence Morocco has a tour in Casablanca. Do not hesitate to book a memorable time in Casablanca. Please contact us if you have some questions. We are at your disposal.

The Top 7 Things to do in Casablanca